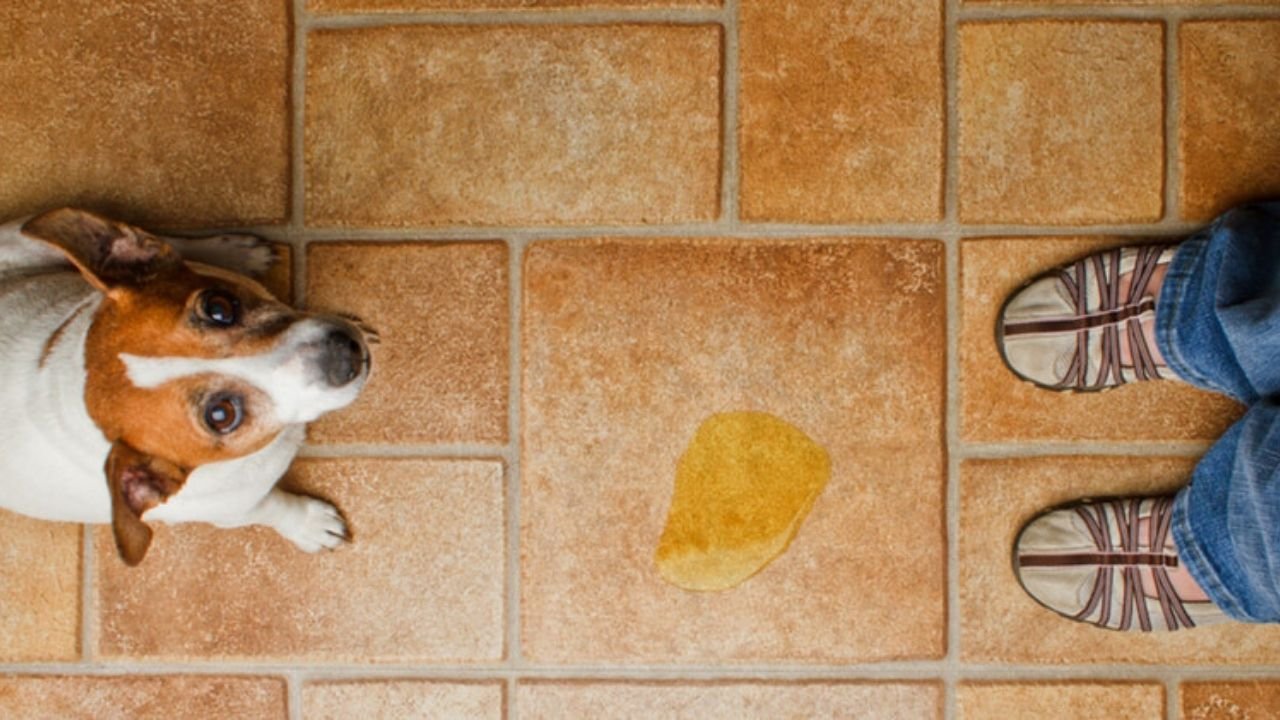 When you ask your vet, “Why is my dog peeing in the house?” he’ll probably just refer to it as “inappropriate urinating.”

This is what happens when a house-trained dog tries to urinate inside the home. And, let’s face it, there are few things more aggravating than that.

There are several reasons a dog’s behavior may suddenly alter, and determining the cause is usually the first step in resolving the issue.

Well, before we go into stating the reason, your dog is peeing in the house instead of its potty, let’s see if they do this act intentionally.

Check Out: How to Stop a Dog From Peeing in the House

Do Dogs Pee in the House Out of Spite?

Is it possible for dogs to pee out of spite?

No. Dogs do not pee to spite you, when they are angry, or to seek attention and retaliation.

Instead, they’ll pee in the house to express nervousness, fear, health concerns, territorial markings, or simply because they don’t have any other option.

There’s a lot more to it, and I wanted to convey why dogs don’t truly pee out of spite or revenge. Here’s what research says about dog behavior and why they pee in your house.

While growing up, my father often shouts and scold Billy for either stealing food or chewing our shoes.

Right after doing that, Billy would pee somewhere in our house – sometimes on my parent’s bed.

The next reaction from my dad is to shout and scold Billy again lamenting that the dog was peeing in the house out of revenge because he scolded her initially.

It was a never-ending cycle.

Then I knew my dad didn’t understand the best way to handle the situation since he was no psychologist, so I had to step into the case.

Well, I didn’t do that because I studied psychology either, I just knew dogs do not process revenge the way humans do.

After extensive research, I got to understand that our dog was peeing in the house to communicate her feelings.

Her feelings weren’t of being spiteful, vengeful, or mad, rather of fear, confusion, and anxiety, which in dogs can make them urinate in the house or indoors.

So, it’s never intentional for dogs to pee in the house, except they didn’t receive proper training.

It’s important you understand this early if you own a puppy.

Check Out: Dog Peeing Blood: What it Means and What You Should Do

Do Dogs Pee in the House for Attention?

If dogs do not pee in the house out of spite, they must do that for attention then, right?

The answer to this question will probably vary. This is what I mean.

For behavioral issues in dogs, acting out for attention is a common occurrence.

These kinds of behaviors are prevalent in animals, just as they are in humans.

And, fortunately, they are often simple to treat – though you must first determine the cause in order to design an effective treatment strategy.

After all, it essentially intended them to be the ultimate friends, so owning a dog comes with a slew of feel-good perks.

Being a pet parent, on the other hand, comes with its own set of challenges that are unique to dogs.

And in the realm of dog ownership, destructive behavior is not unusual.

Why Do Dogs Choose to Pee in the House?

From the previous explanation, you understand dogs don’t pee in the house out of spite.

The truth is, dogs do not comprehend revenge and will not act maliciously. They do not know vengeance because they preoccupy their minds with food, fun, warmth, and survival… in a pack with a defined pecking order.

Dogs have a more novel idea of time than humans and live in the moment. It’s not how we’d preserve a memory or harbor a grudge in order to exact vengeance later.

According to Science Focus:

“Dogs have a sense of time but probably not a ‘concept’ of time. Human episodic memory means we pinpoint times in the past and look forward to the future. Studies suggest dogs live very much in the present but, like us, their internal clock or circadian rhythm regulates body processes such as when to go to sleep and get up.”

A dog will not assess a situation and determine that it must punish you out of spite.

You might think your dog pees inside out of spite, to get attention, or because he’s angry.

This isn’t the case at all.

Why is My Dog Peeing in the House Suddenly?

The reasons for your dog suddenly peeing in the home range from innocuous, such as drinking a little too much (water), to the dangerous, such as diabetes.

Looking at what else is going on with your dog will help you figure out which cause is at work in your house.

Your dog may become confused and urinate inside if they haven’t been properly house-trained.

This frequently occurs when puppies may pee inside occasionally, such as on a puppy pee pad. And it may cause kids to be perplexed by the notion that they can only do so outside.

This is more likely to be a long-term issue than a one-time occurrence of inside peeing.

However, if they suddenly need to pee indoors, they may opt to pee where the pee-pad used to be.

While we usually worry about dehydration, your dog could also over-hydrate. Instead of causing major health problems, this usually means they have to pee a lot and won’t be able to hold it until their next trip outdoors.

Drinking more than usual could be a sign that there is a problem, yet if they are drinking from an unknown water source, you may not notice.

The other possibility is that they will whimper at the door more frequently, showing that they need to go outside to pee but then returning inside when they cannot do so.

Dogs mark their territory with their pee, so if they pee inside, they’re presumably letting someone know that the house is theirs.

Male dogs who have not been neutered are particularly prone to this, but any dog may begin to do so in response to a danger to their personal space.

The advent of a new pet is frequently the source of this.

When marking, dogs will often emit just enough urine to make a smell rather than emptying their bladder, thus you can usually tell if this is the case if they are only peeing a little.

It’s also possible that they’re peeing on vertical things instead of the ground, as this is a typical element of marking.

It’s possible that their inability to control their want to pee within is an emotional response.
Your dog may opt to urinate wherever they are because of over-excitement, the urge to submit, nervousness, or fear.

In many circumstances, the interaction that triggers the peeing will be visible, such as over-excitement or surrender. But it isn’t always that straightforward.

For example, you won’t know whether your dog is peeing inside because of separation anxiety until later.

However, you’ll most likely notice other signs of their mental instability.

A variety of medical issues might also affect your dog’s bladder control. Among the most common are:

You’ll need to see your veterinarian figure out which of these illnesses is causing their incontinence.

They’ll most likely start by screening for a urinary tract infection, which is one of the most common health issues in dogs.

Urinary tract infections can also cause the following symptoms:

If a urine test for this comes out negative, your veterinarian will start looking into more serious health issues.

Incontinence can also make bladder control problematic for senior dogs. This is more common in dogs over the age of seven, and other indicators of aging, such as decreased energy levels. often accompany it

This can be managed with medication, but you may also have to accept a lifetime of doggie diapers.

The variety of doggie diapers available may surprise you.

Why Is My Dog Suddenly Peeing In The House?

There are a number of reasons why a dog may start peeing indoors unexpectedly. If they’re doing it on a regular basis, you should take them to the vet to be treated for urinary tract infections or other possible causes.

It could, however, be a behavioral response to a change in surroundings or anxiety. To combat this, do everything you can to address the underlying problem and commit to re-housetraining your dog.

Do Dogs Pee in the House Out of Spite?

Dogs, unlike humans (and possibly cats), do not experience resentment, thus they aren’t peeing in the house to show their displeasure. They may develop bad bathroom habits as a result of emotional trauma, but this is out of their control and not an act of spite.

Do Dogs Pee in the House for Attention?

When it comes to behavioral issues in dogs, acting out for attention is a common occurrence. These kinds of behaviors are prevalent in animals, just as they are in humans.

And, fortunately, they are often simple to treat – though you must first determine the cause in order to design an effective treatment strategy.

After all, they were essentially intended to be the ultimate friends, so owning a dog comes with a slew of feel-good perks.

Being a pet parent, on the other hand, comes with its own set of challenges that are unique to dogs. And in the realm of dog ownership, destructive behavior is not unusual.

How Can You Tell If Your Dog Has A Urinary Tract Infection?

How Do You Tell If A Dog Is Marking Or Peeing?

The quantity and location of peeing might be used to identify it for marking reasons.

When marking, a dog will usually not empty their bladder completely, but only enough to leave a scent.

Additionally, they will be more prone to spray their marking urine onto vertical things rather than peeing on the ground.

When your dog decides to start peeing in the home, it is inconvenient, but it is not a reason to become enraged or punish your dog. They’re doing it because they can’t help themselves.

They could be ill and require medical attention for a disease such as urinary tract infections, or they could be exhibiting a behavioral response.

Significant changes in their environment, as well as anxiety, can induce them to pee in unsuitable areas.

So don’t get enraged; instead, think critically and find a solution. Take your dog to the vet to find out if he or she has any health issues, and work out a treatment plan with your vet.